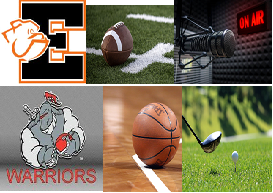 Aaron began his radio career when he was 13 and spent the next three decades doing what he loved. Aaron was actively involved with UNOH, WIMA, BYAA, and Lima Warriors Semi-Pro Football. He was the commissioner of Northwest Central Conference High School Association. He was the voice of LCC for several years. He was a 25 year staple in Lima media. He formerly coached for Spencerville Girls basketball, and flag football at Elida. He also coached little league baseball at Elida and Elida Thunder football. Aaron was also on the board of the Men’s City Golf Tournament and took care of all their media. He most currently worked for WTLW/WOSN TV 44. Aaron was an avid fan of The Ohio State University, Kansas City Chiefs, and the Detroit Tigers, Pistons and Red Wings. Now he is cheering on the “Angels” and the “Saints”. Aaron was a faithful member of Shawnee Church of Christ.

Along with his parents and wife, he is survived by his sons, Brenden and Austin; his siblings Matt (Mindy) Molaski, Sarah (Tony) Spencer; a sister-in-law, Lynn Stoffel; many nieces and nephews that adored their uncle Aaron; many aunts, uncles and cousins.

He was preceded in death by all of his grandparents, and his in-laws, DeWayne and Nancy Hyman.

Aaron had a love of life, love of his family, and love of his God. He was larger than life with a personality to match. He was a star that will continue to always shine bright.

A Celebration of life will follow at a later date.

In lieu of flowers, memorial contributions may be made to Aaron Matthews Memorial Fund for area youth sports.

To send flowers to the family or plant a tree in memory of Aaron "Matthews" Molaski, please visit our floral store.

You can still show your support by sending flowers directly to the family, or by planting a memorial tree in the memory of Aaron "Matthews" Molaski
Share a memory
© 2022 Chamberlain Huckeriede FH. All Rights Reserved. Funeral Home website by CFS & TA | Terms of Use | Privacy Policy